However, we can claim to be playing on the oldest course: a group of golfers, including H.J. Percival, who was Secretary from 1894 to 1918, attempted to start a club in 1875 on the site of our course. The club was founded following the creation of the railway branch from Brighton to the Dyke in 1887 and a stop for the golf club was built in 1891. The original 9 holes were similar to today’s.

The club became popular and when the course was extended to 18 holes in 1891, membership soon reached the limit of 375. All were men; a separate 9 hole Ladies club was formed and built near the Devils Dyke in 1891. Brighton & Hove was recognised as a testing downland course and attracted good golfers. Brighton being fashionable as an Autumn resort, the club flourished in the Edwardian era. Membership was predominately from the professional classes and the club retained its reputation until after the second World War.

During the war, the Ladies’ course was requisitioned for military practice and destroyed, so the Ladies Club eventually merged with Brighton & Hove. The friendly atmosphere that now prevails was established in the post-war period, when financial pressures were hard for all clubs. The 4 holes at the south end of the course were compulsory purchased to extend the council estate and the new holes that were built to replace them were not a success. In 1960, the course reverted to 9 holes.

Today Brighton & Hove is one of the most attractive and best maintained 9 hole courses in the country.

Brighton & Hove Golf Club: a timetable of the early years.

Other than their passion for the game, there were two very good reasons why Hamilton Percival and Percy Willett set out their nine holes of golf on Hangleton Down in 1875. The first was the fact that this green prominence faces the prevailing wind – that most fickle and trying of the natural hazards. Their second reason – and probably the deal closer – was the coming of the railway.

The Devil’s Dyke had been attracting visitors for decades. A wooden hut was erected on the hill in 1817 to serve as a tavern and this was replaced by a more substantial building in 1831 and this was then bought by entrepreneur William Thacker who established a proper inn known as the Dyke Hotel, together with a range of attractions.

Thacker laid on horse-drawn charabancs to take his customers from the town to the Dyke but as early as 1872 plans were drawn up for a railway. Whilst this plan and a second, put before Parliament in 1873, failed, in 1877 the Brighton and Dyke Railway Act was promoted and on 2nd August 1877 was enacted. These plans would have encouraged Percival and Willett in their determination to play golf on Hangleton Down.

Whilst Percival and Willett and their group of like-minded friends thought nothing to walk up from the town for a day’s golfing (Percival lived in Cambridge Road, Hove) they were not as successful in persuading the new wave of socialites to share in such strenuous exercise. Hove had replaced Regency Brighton as the destination of choice for the wealthy during the season and these people were quite content to wait for the opening of the railway to take them to golf.

The Golfing Annual for 1887 has an entry set between Brantford, Canada and Buckie, Scotland, that reads, “Brighton Golf Club, instituted 1887. No particulars forthcoming.” It would seem that, as the long awaited railway did not open until September of that year that the members of Brighton and Hove’s high society had decided in principle to found a golf club but the formality would have to wait. That having been said the records of the B&DR states that Brighton & Hove Golf Club had opened in October 1887.

The early records state that the foundation date is 1887 and that a meeting at The Old Ship Hotel in January 1888 brought the club into being with 70 founding members. At first the course of nine holes was much as Percival and Willett had laid it out with a southern boundary slightly beyond the current layout and with just two greens in the valley. Members could ride to golf by train to the Dyke but had a walk of nearly mile to the first tee and had to put up with a shepherd’s hut for a clubhouse. By the end of the year 129 members had paid their 2 guineas entrance fee and 1 guinea subscription.

An ironclad clubhouse is built and the membership limit was extended to 200.

The Brighton & Dyke Railway provides a private halt for the golf club and in September an 18-hole course is opened with a professional tournament taking place over the course of two days for a first prize of £10.

Brighton & Hove Ladies’ Golf Club opens with nine holes set out to the southwest of the Dyke Hotel and a five-minute climb up from the Dyke station. Unlike the patriarchal Men’s club the Ladies appeared to have been rather more open as, “gentlemen members are cordially welcomed – up to a certain point.”

In November Brighton & Hove Men’s club hosts a competition sponsored by the “Illustrated Sporting and Dramatic News” which attracted some of the finest players in the country, the trophy being carried of by Horace Hutchison.

The railway company enters into an agreement with the Men’s club to install a bell in the clubhouse and connect this with the signal box at the Dyke so that members might be given warning when the train was leaving the Dyke, thus giving them time to finish their drinks and make their way to Golf Club Halt.

C. Wooley formalises the arrangement with Lord Sackville by agreeing a lease on the land and is rewarded by being offered Life Membership for £25.

Ladies are allowed to play at Brighton & Hove Men’s club – on Tuesdays and after 12 noon.

A brick built residence is provided for the Club steward, his wife and servants at a cost of £500.

Hamilton Percival is appointed as the first salaried Secretary of Brighton & Hove Golf Club at £150 per annum plus a season ticket for the Brighton & Dyke Railway. The membership of the Men’s club stands at 365, whilst the Ladies’ club playing membership is limited to 150 ladies and 40 gentlemen with 50 non-playing members.

The Men’s course is further extended with three new holes, each over 400 yards, being brought into play; A. R. Kenyon-Stow wins the inaugural match with a score of 79 – including a 7 at the 7th!

James Braid redesigns the Men’s course and the new course is opened on April 8th with an exhibition match between Braid and J. H Taylor in a gale of wind from the NE; Braid returns a score of 75 to Taylor’s 82. In the afternoon fourball Braid, playing with the B&H professional Andrew Denholm, beats Taylor and C. Parsons. In November that year Parsons sets a new professional record with a score of 64. Ironically, given the importance of the railway in the development of the club, by 1908 the arrival of the train at the Golf Club platform had been causing congestion on the first tee on competition days. The owners of cars and others who came by road were encouraged to come early – three couples were allowed to start before the ballot – or to join the ballot with those arriving by train.

Ladies are allowed to play at the Men’s club on all days “except Saturdays and competition days”.

James Braid is again consulted on modifications to the course.

Brighton & Hove Golf Club acquires the freehold of the course and surrounding land.

The Artisan Section of the Men’s club is formed.

The end of the line; on Saturday 31st December 1938 the 5.37pm train from the Dyke stopped at Brighton & Hove Golf Club Halt for two passengers making the trip with their plus fours and golf bags for the last time.

The image below shows the Club House area in 1946; the barn (and dip) can be seen at the bottom, and to the left the track of the old Dyke Railway which closed in 1938.  However running from the club house towards the top left can be seen the track the members used to reach the platform for their journey home.  The platform is the dark area seen on the track curve! 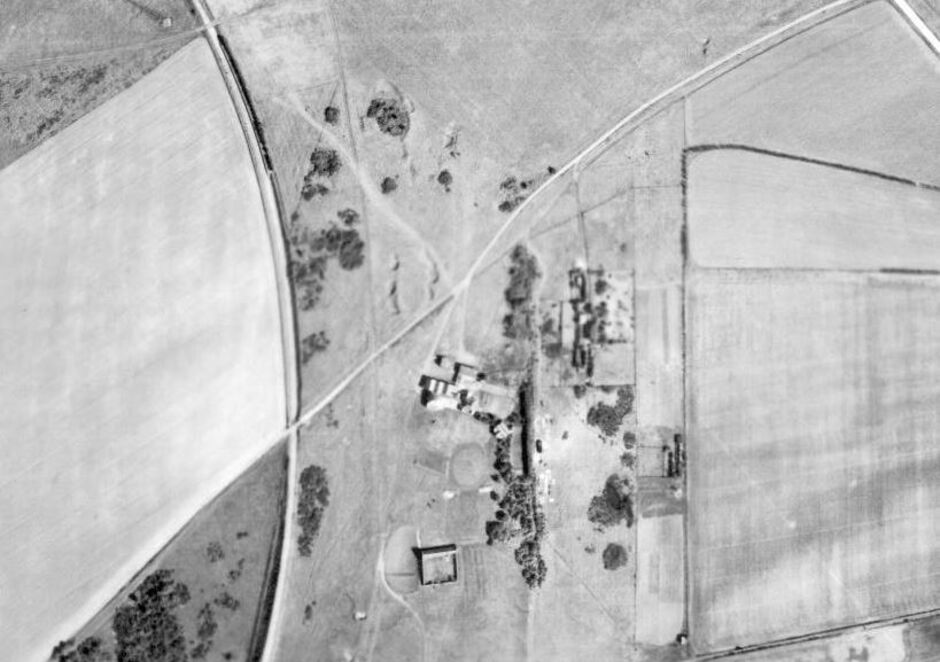 Map below shows Brighton & Hove Golf Course when it was 18 Holes, and reached almost down to Hangleton Park.  In fact we believe it stopped just short of where Kings School is now, and of course in the 1950's Hangleton Park extended much further north.

Also seen on the map is the old West Hove course, when it started from the Old Shoreham Road, where Sainsbury's is now! 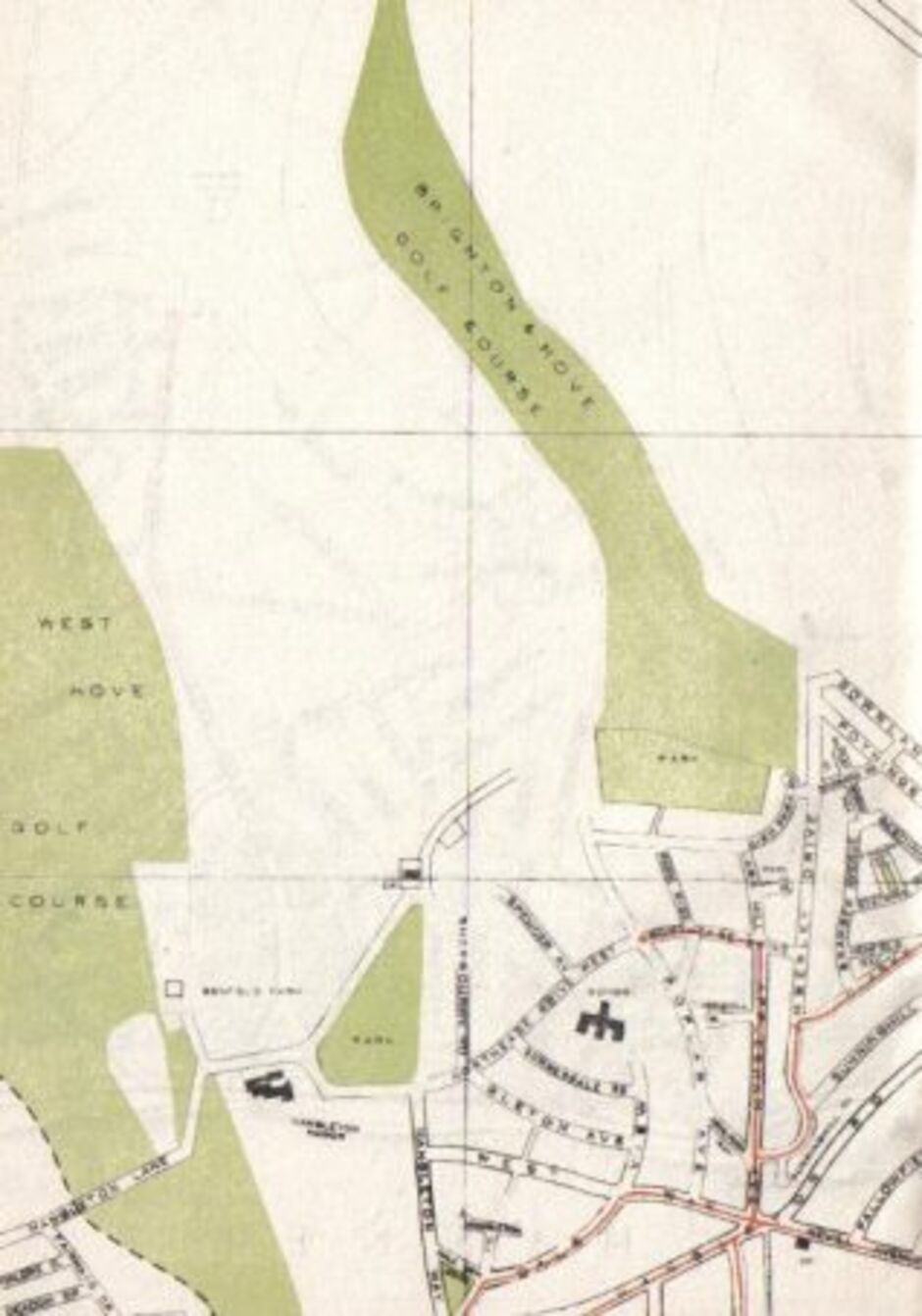 Copies of Brighton & Hove Golf Club A History to the Year 2000 (Plotting the Origins of Golf in Sussex) are available from the Secretary.

Members can now access key club information via the intelligentgolf app, available for iPhone and Android. This will allow easy access to your competition data, upcoming games of golf and much more.
Read More...